The Mazda MX-30 electric SUV has been available for purchase since 2020, but have you noticed? Sales of the first Mazda to be fully electric have been, to put it mildly, modest. Furthermore, we doubt that the slightly modified 2022 version will significantly alter the situation.

While it is somewhat disappointing on the one hand—the MX-30 is a handsome compact crossover with a wonderfully finished inside and that exquisitely straightforward Mazda infotainment system—on the other hand, it is completely expected.

The fact that Mazda, in all of its amazing wisdom, has produced a contemporary EV with a meager 35.5kWH battery pack and an appalling 124-mile claimed driving range.

Interior of the Mazda MX-30

How does the interior of the Mazda MX-30 look? 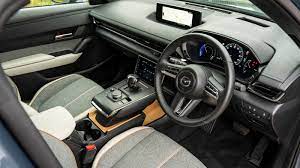 If you’ve ever sat in a high-end MX-30 M Hybrid, this experience is more of the same. Along with the floating center console, real cork inserts, fascinating brown Maztex leatherette and fabric upholstery, and a touch climate control panel.

Access to the cabin is made possible by “Freestyle Doors” in the RX-8 fashion, which heightens the visual drama. The previous name is no longer being used.

Like its exterior, the interior of the MX-30 combines standard Mazda components from other vehicles in the lineup with more eccentric design and trim items appropriate for the “Mazda Experimental” (or MX) designation.

The front seats are supportive and comfy, and the driver’s seat may be adjusted electrically with memory presets.

In harsher weather, the fabric seat inserts are fantastic because they don’t get cold or hot, and We personally prefer the extra feel of cloth trim. In contrast to the 50 colors of grey found in contemporary automobile interiors, Mazda’s “Vintage Brown” leatherette is a welcome change of pace and has a lower environmental impact because of its lack of organic solvents.

Despite the higher ride height, the driving posture is still very similar to that of a car, and both front seats have fast-release levers that may be used to swiftly move seats out of the way if you have passengers in the back.

Motor, Power, and Performance of the Mazda MX-30

A 143-hp electric motor powers the front wheels of the all-electric Mazda MX-30; all-wheel drive is not an option. All-wheel drive may still be an option given that there will be a plug-in hybrid model that will debut later and connect an electric motor with a rotary engine. The MX-30’s acceleration falls short of more potent competitors, as indicated by its low horsepower rating. At the test track, it took 8.7 seconds for it to reach 60 mph. What we would anticipate from a contemporary Mazda is a chassis that is bouncy and crisp steering. The MX prefix, which is unique to the brand’s MX-5 Miata sports vehicle, is what gives this SUV its quick handling.

Charging, Range, and Battery of the Mazda MX-30

The 30.0-kWh battery pack for the MX-30 is tiny when contrasted to other electric vehicles. Its estimated driving range, which is less than half that of the Bolt and the Kona Electric, is just about 100 miles per charge, according to the EPA. The batteries will be able to be charged using both conventional AC power and more recent, quicker DC chargers.

Connectivity and Infotainment in the Mazda MX-30

A second 8.8-inch display that covers infotainment elements like the music system, navigation, and rear camera protrudes from the dashboard in addition to the electronic panel for the MX-30’s climate controls and car settings. The MX-30 utilizes Mazda’s most recent infotainment system, which debuted on the 3 sedans and hatchback, and provides connectivity for both Apple CarPlay and Android Auto.

Price of the Mazda MX-30

Although the  Mazda MX-30 is available in standard and Premium Plus trims, its costs are greater than those of popular competitors like the Bolt and Nissan Leaf. It is $34,690 in price. Active blind-spot assist, front cross-traffic alert, a 12-speaker Bose stereo, a heated steering wheel, a 360-degree exterior camera system, and other features are all included in the Premium Plus variant.

Safety Features in the Mazda MX-30

The collection of standard features known as i-Activsense offers collision-mitigation and lane-keeping functions to assist lower the chance of an accident. Visit the websites of the National Highway Traffic Safety Administration (NHTSA) and the Insurance Institute for Highway Safety (IIHS) for more details regarding the MX-30’s crash test results. Important safety elements include:

The MX-30 SUV is Mazda’s first all-electric model. It has a chic design and a straightforward interior, however, it lacks a necessary driving range. The sleek appearance features a roofline resembling a coupe and rear doors that open in the same way as the BMW i3 electric vehicle. A 143-hp electric motor powers the front wheels of the EV Mazda SUV, which has a 30.0-kWh battery pack with a range of up to 100 miles. The Mazda’s speed isn’t nearly as quick as that of rival EVs like the Chevrolet Bolt, Ford Mustang Mach-E, or Tesla Model 3, all of which have a range that is more than twice as long as the Mazda’s.