The latest electric SUV from Bengaluru-based Pravaig Dynamics has been presented in India. The Pravaig Defy, which is the consumer variant, will be its name. According to Pravaig, the more customizable edition will also be offered. The latter is the Veer model, which is offered mainly to the army and other services. Let’s offer you a general idea of the Defy SUV even if these are prototypes with parts ready as in the production model.

The exterior of the Pravaig Defy

This electric vehicle has a great road presence and measures 4.9 metres. Its large hood and prominent shoulder with distinct lines, in addition to its dimensions, contribute to this. It has a stylish grille and projector-style LED headlamps. Then there are the indentations for the several locations that have cameras. It also gets a flat roof, linked LED taillights, and a sizable roof-mounted spoiler that are all reminiscent of the Land Rover’s rear appearance. Additionally, it has multi-spoke alloy wheels and a body covered in black plastic. With a 234 mm ground clearance, it should be capable of traversing India’s difficult terrain and roadways.

Interior of the Pravaig Defy

Since it’s still a prototype, the interior wasn’t really intended to be made public. However, we got a sneak glance inside the interior of this real four-seater car. The suicide doors will make it look unique. We hope to see an enhanced version at the 2023 Auto Expo, but it’s too soon to make any judgments about the fit, polish, or construction quality.

However, it is said to be roomy, particularly for the back passengers since the second row offers 1,215mm of legroom and 1,050mm of headroom. There is 600 liters of boot space, and an additional 80 liters of trunk space are available for hauling luggage.

Features on the Pravaig Defy 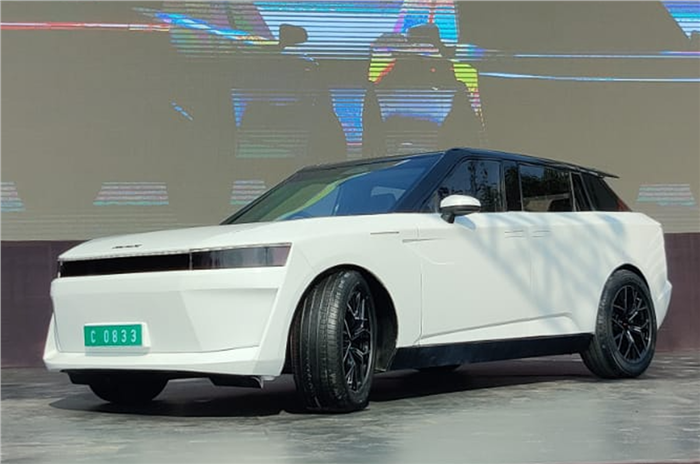 With Defy, the Indian automaker intends to enter the 5G streaming business while also emphasizing the privacy of its customers. This SUV now boasts a big display infotainment system with a wide range of connectivity options, and rear touchscreens could be added in the future. The package also includes a wireless phone charger, a Devialet sound system, linked car technology, and an air purifier. The captain seats, which are heated and electrically adjustable, should not be disregarded.

Battery and Range of the Pravaig Defy

According to Pravaig Dynamics, the EV’s battery capacity will be just over 90kW. It will be coupled to a twin motor that produces 620Nm of torque and 402bhp of total power. It will offer rapid acceleration from a stop, with a claimed time of just 4.9 secs for the sprint from 0 to 100 kilometers per hour. Additionally, the Defy has a maximum speed of 210kmph. Additionally, all-wheel drive will be an option across all models. It also dazzles with a battery range of more than 500 kilometers. The battery can be recharged quickly up to 160kW capacity, and it can go from empty to 80% charged in 30 minutes.

Price and Launch of the Pravaig Defy

The Defy is a big SUV with a stylish appearance that will reportedly have high-tech amenities and a roomy cabin. These prototypes are currently far from complete and won’t be delivered until the end of the following year. But given that Pravaig has already begun taking reservations at Rs 51,000, we expect that all of the promises would be kept. They claim that 800 reservations was made even before they were made public.

The waiting period for an SUV with such a standard price of Rs 39.5 lakh is already nine months. As formal bookings have begun through their website, the Pravaig Defy ev SUV’s specifications, performance figures, and range will be essential in drawing customers. There is no other EV in this price range.

Platform and Powertrain of the Pravaig Defy

The Defy SUV, according to Pravaig, is constructed on a chassis specifically designed on a skateboard platform. Since the battery is in the middle of the SUV because it is a skateboard, more room is available for passengers and their belongings. Future goods may be supported on the same platform.

With this amount of power, the Defy can compete with SUVs like the Mercedes-Benz EQC, Jaguar iPace, and Audi e-Tron. The SUV also has four-wheel disc brakes with ABS and ESP and three degrees of regeneration that permit one-pedal driving.