The Pro and Plus are now the most expensive electric scooters on the market, with prices starting at Rs 1.45 lakh for the Plus’ base model and Rs 1.59 lakh for the Pro. Hero made it clear prior to this debut that the fact that Vida wasn’t one of the first Indian e – scooters didn’t matter. Hero put more emphasis on striving to make their scooter the finest. Does the Vida live up to the expectations and fanfare, then?

Design of the Vida V1 Pro 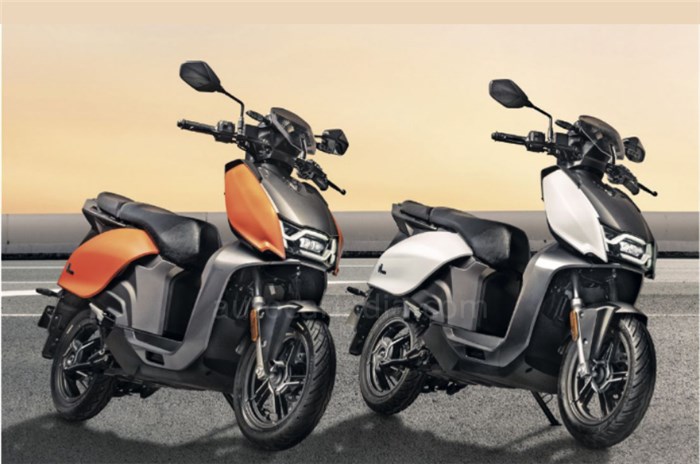 The Hero Vida V1 Pro is an eye-catching, unmistakably modern scooter. It has a good balance of conventional and modern elements and is sensibly proportioned. A quirky headlight in front of you is accompanied with DRLs. Above that, a windshield that resembles the Yamaha RayZR is presented.

A bright 7-inch color TFT touchscreen is right behind you, making it simple to see even while driving in direct sunshine. Geofencing, tracking, and turn-by-turn navigation are all functions that are possible because to the screen’s compatibility with Bluetooth, 4G, and WiFi. A large exposed handlebar with its switchgear is located beneath the cluster.

The split seat on the Vida V1 Pro unfolds as a single piece. A tiny full-face or half-face helmet can be tucked into the back (larger) area of the under-seat storage, which is also divided into two compartments for additional items. Two detachable batteries are held in the front (smaller) part, leaving very little room for other items such as compact documents or smartphones.

The design motif continues in the rear, where two LED strips are woven together to form a stylish taillight. The tags that distinguish the V1 Pro and Plus are a significant aspect. And if you peek inside, you can see how big their batteries are. The scooter has a beautiful design language, but the quality and reliability on the test model fell short of what we might have expected from a firm with such a long history.

The switches felt a little too fragile, certain panel gaps were irregular, and the battery access door appeared to be an afterthought. This might have been a problem with a preproduction batch that Hero could fix before buyers received their orders. This is especially true given that the Vida will compete directly with vehicles like the Bajaj Chetak EV, a vehicle that checks off all the right boxes in every one of these categories. Overall, the Vida V1 Pro isn’t all that controversial and appeals to the majority of riders thanks to its selection of pastel colour schemes.

Range and Performance of the Vida V1 Pro

The Hero Vida V1 Pro’s main specs include 6kW peak power, 165km of range under Indian Driving Conditions (IDC), and a 3.94kWh battery. 80 km/h peak speed and 3.2 seconds for 0–40 km/h. Yes, it sounds impressive on paper, but how does it actually apply in the real world?

The Vida V1 has four riding modes: Eco, Ride, Sport, and Custom, the last of which can be customized through an app that wasn’t quite finished when this test was conducted. Before power comes on in Eco mode, there is a tiny delay, but it thereafter picks up speed effortlessly. The throttle calibration in Ride and Sport feels perfect and is extremely reminiscent of that of an excellent ICE scooter.

The performance track at the CIT has a long straight, allowing everyone to test how quick this scooter is. This is where the new Hero EV really shines, approaching the declared peak speed despite the heft and a strong crosswind. The Vida V1 Pro accelerates rather well up to 50 km/h, after which the ascent to the top speed becomes slower and more “scooter-like.”

This is totally reasonable given that most scooters spend the majority of their lives traveling between 30 and 60 kph. Researchers were able to grade the Vida using a handful of the small flyovers that the CIT has to offer.

The scooter’s regeneration option is activated by turning the two-way throttle system past the stop point in the opposite direction. The regen was quite understated and never seemed overbearing. When we acquire the Vida for more thorough testing, Hero informs us that we’ll be able to customize the amount of regeneration in the Custom ride mode.

The regular Plus variant’s 3.44kWh battery is less than the 3.94kWh battery found in the V1 Pro, which increases range. In comparison to the Plus’s 143km, the Pro advertises a 165km IDC range on a full charge. The claimed 0-40kmph speeds are 3.2 and 3.4 seconds.

Ride and Handling of the Vida V1 Pro

Despite appearing small in pictures and even in reality, the Vida V1 Pro is a very comfy scooter that fit well despite being a taller or larger rider than normal.

The spacious, well-cushioned split seat design keeps your lower half in place. Additionally, reaching for the handlebar feels quite natural and comfy. Though they have only driven Vida on buttery smooth, well-paved CIT roads thus far, our thoughts on the scooter’s riding quality aren’t entirely formed.

Even in the rain, the 12-inch wheels and MRF tyres perform a decent job of delivering good traction. A Bybre calliper bites on the front disc brake, which provides braking power. A drum is in charge of the back brakes. Excellent braking performance with sufficient bite and advancement. But as a buyer, I would anticipate that the Vida will come standard with twin channel ABS and disc brakes on both ends.

Price of the Vida V1 Pro

These are really our preliminary thoughts; after giving the Hero Vida more time, We will give you our complete opinion. However, as it stands, we think the Hero Vida V1 Pro is a good option for anyone looking for an electric two-wheeler. But does it have the potential to upset the established order?

Actually not at all. The scooter is fine in and of itself, and what we like best about it is how traditional it seems. In other words, sitting on this and being comfortable with an EV would be extremely simple for someone who has been riding ICE scooters for a very long time. Which is one account of the events. Because the Vida V1 Pro also has some drawbacks.

For a company like Hero MotoCorp, the build quality simply isn’t good enough. Additionally, the scooter lacks dual-channel ABS. The instrument cluster doesn’t offer full-fledged navigation like the Ola S1 Pro or the Ather 450X, despite being touchscreen and a good size at 7 inches.