This 2024 GranTurismo Folgore sports car from Italian automaker Maserati is the company’s second entry into the electric vehicle industry after launching an EV version of its new Grecale compact SUV. The Folgore name, which in Italian means “lightning,” will be present on every Maserati electric vehicle. Along with its high-voltage nomenclature, the GranTurismo Folgore promises some, well, lightning-quick acceleration. The automobile will be able to accelerate from 0 to 60 mph in less than 3.0 seconds, claims Maserati.

Three electric motors with a combined horsepower of 750 are needed to reach that number. The GranTurismo Folgore is similar to the new gasoline-powered GranTurismo in terms of appearance and interior, and it may give rise to a convertible GranCabrio Folgore as well.

The Folgore has a stiffer body and better weight distribution than the ICE vehicle while being heavier, thanks to extra strengthening. The outcome is a wonderfully organized and unique driving experience.

What’s new in the GranTurismo Folgore?

When the GranTurismo Folgore goes on sale, it will represent a whole new model for the Maserati line. It will go on sale with the GranTurismo powered by gasoline, although we anticipate it to arrive on dealer lots just before end of 2023.

Price of the GranTurismo Folgore

GranTurismo Folgore is only available in one model, but the gasoline-powered GranTurismo is available in Modena and Trofeo trims. You can anticipate eco-friendly interior materials, an abundance of infotainment and driver-assistance technology, and blazing performance.

Electric Motor, Power, and Performance of the GranTurismo Folgore

Three electric motors totaling 750 horsepower drive the GranTurismo Folgore’s four wheels. The electric GranTurismo will therefore probably be faster than its gasoline-powered competitors, the most potent of which only produces 542 horsepower. Three motors are used, with two driving the individual rear wheels and one driving the front axle. This, according to Maserati, enables a torque-vectoring characteristic that resembles a limited-slip differential.

Range, Charging and Battery of the GranTurismo Folgore

The driving range of an 83.0-kWh battery pack should be roughly 230 miles, but we’ll have to wait till we have the opportunity to conduct our actual range testing before we can confirm this. According to Maserati, the GranTurismo Folgore can be quickly charged at up to a 270 kW connection, which, by their standard, would add 100 km of range in under 5 minutes.

Economy and Range in the GranTurismo Folgore

The  Folgore’s estimated fuel economy and range are yet unknown according to the EPA, but we’ll update this article as soon as we know more. In order to evaluate the electric sports car’s performance in the real world, we’ll also drive it on our 75 mph highway fuel-economy route. Visit the EPA website to learn more about GranTurismo Folgore’s fuel efficiency.

Interior and Storage of the GranTurismo Folgore 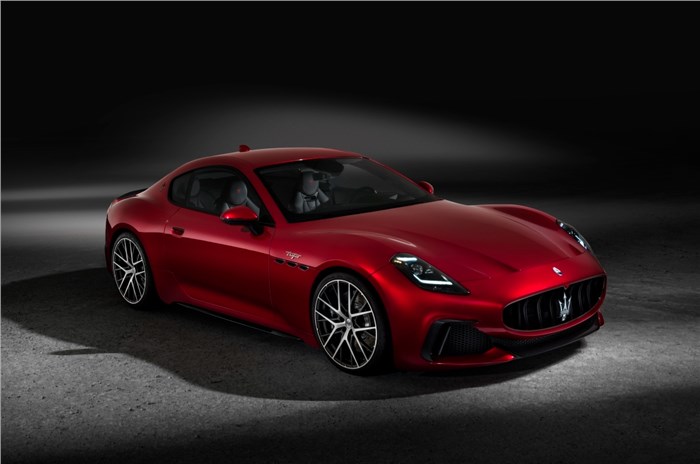 The Folgore is a four-seat sedan with a luxurious interior, just like the normal GranTurismo. Although you wouldn’t know it by looking at it, the interior of the car is designed with sustainable materials, including upholstery created from reused fishing nets that were found in the ocean. Similar to competitive models like the Aston Martin Vantage and Mercedes-AMG GT as well as the ordinary GranTurismo, the cargo and passenger space should be comparable. In order to accommodate stashing a folding fabric roof, the trunk capacity of the GranCabrio version of the Maserati will likely be reduced.

Infotainment and Connectivity in the GranTurismo Folgore

A 12.3-inch multimedia touchscreen running Maserati’s most recent Google-based infotainment system is included on all GranTurismo versions. Additionally, a secondary 8.8-inch display that serves as the climate control panel is present, as are wireless Apple CarPlay and Android Auto. Additionally available are a head-up display and a Sonus Faber-tuned 19-speaker premium stereo system.